I have a serious issue. Some might call it a first-world problem. It is probably some form of Karma. It makes play dates pretty awkward.

Friend: “We are so looking forward to having Caleb over for a play date. Does he like pizza?”

Of course this question is just a courtesy. Every kid loves pizza, right? This guy looks pretty average in my book. 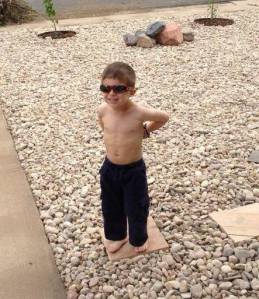 Wrong. In my experience, there are five meals that are no-brainers for the 10 years and younger crowd, hands down. Pizza, macaroni and cheese, hot dogs, spaghetti (pasta), and grilled cheese. Not the case for my son. I might be partially to blame for the hot dog and pizza thing. After my daughter started walking, I was so strapped for time and energy, we probably had hot dogs five out of seven days a week. I wasn’t creative in how I served them, but to my credit, I did serve my kids all-beef, Kosher, grain-fed, cage-free, and very expensive hot dogs. At probably about 2 months in, my son gagged and threw up on a hot dog, but he was already sick (probably malnutrition or sodium overdose). Since that day (about three years ago), he insists that hot dogs make him throw up and will not touch anything resembling a hot dog. This makes serving sausage and other hot dog-like items tricky, which has severely limited my choices in freezer-to-table dinners. During that same time period, on the other two days of the week, I served the kids pizza. From the start, my son was skeptical. He would pick off the cheese, lick the crust and then eat the edges only. We even experimented with fruit pizza. 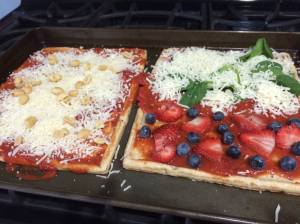 As for the other kid foods, he won’t even sit in the same room as a grilled cheese and the sight of pasta sends him into a whining fit. As an aside, he hates eggs too. They get caught in the back of his throat and end up back on the table in a gooey glob. Gross.

What do you do, then, as a parent of this kind of child? No quick tricks up my sleeve. I’m not that mom in the commercials who can come home from a long day at work, pop some pizza rolls in the oven, and serve her children a quick and healthy (?) meal that make her children smile and dance. I can’t bring home the freezer pasta-in-a-bag-just-add-water on my way home from work. I can’t even pick up a tub of KFC and deliver it to my table while my kids bounce up and down in joy, barely containing themselves from jumping into the bucket of finger-licking-good (Caleb has placed a moratorium on chicken in all forms-fingers, nuggets, tenders, etc.). What good is being a working, single mother of two if I can’t live a life that resembles daytime TV food commercials??? At least my other child eats like a normal kid – I think? 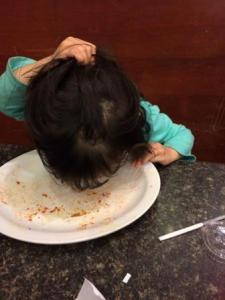 Here is a brief list of what my son WILL eat: spinach, hummus, any kind of fruit including gross fruit like cantaloupe, tofu, plain hamburgers, red peppers, carrots, peanut butter and honey sandwiches, pancakes and muffins with strategically hidden vegetables, and ice cream sandwiches. On a recent play date, he boldly told his friend’s mother that he did not like the hot dogs she was serving and asked if he could find something else to eat for dinner. She said sure and gave him free rein to her refrigerator (which he doesn’t even have at my house), where he proceeded to make himself a dinner of peaches and ice cream sandwiches. He did check with her for peanut butter as well, but she was out. She relayed this story to me when I picked him up. She was extremely amused. I wanted to disappear through her floor.

I have morphed into this weird mom, who is surprised when people say to her, “wow! I can’t believe you serve your children spinach.” I think to myself, doesn’t every kid LOVE spinach? I think the answer is clear when my children’s friend’s parents insist on having my kids over to THEIR house for play dates…